The Silly Season and Democratization of the Church

As far as I am concerned, anyone within the Church who argues that it should become more 'democratic', especially with the election of the Pontiff and the Appointment of Bishops is, in my mind, a Heretic. Not just misguided individual but an actual heretic preaching heresy who must be brought to recant and reconciliation. Usually because the people who do think the Church needs democratization often preach it as if they were firebrand revolutionaries.

To go into exactly why I believe this, I cite the past 40 years of Church history and the absolute failure of both Catholic and Protestant communities in using 'Youth Movements' to try to stir young people to be enthused about the faith, only for such actions to flounder, imagine if the entire Catholic Church was that? Only trying to appeal to 'demogrpahics' for votes, dividing us into theological-political camps moreso then there already are such structures, even among groups that agree with eachother nominally, they Church is a Billion strong, this kind of thing is unavoidable. But if you want a more relevant reason why democratization is bad, I refer to you the 'Silly Season' which is the media frenzy leading up to the sedevacantic period and the Conclave.

Every pundit, every media outlet, every mover and shaker of this fast past, wired information age we live in is absolutely scrambling to try to convince people about 'who' the next Pope should be, what criteria should be used to select the Pope, and preaching doomsayings about the Church being destroyed if it doesn't get with the times. You know, what they've been telling the Church for the past century through every fad and era the rest of the world has gone through, forgotten and made fun of by now. Which is the fate this era is inevitably doomed to in its own time. Trying desperately to convince the people whose votes actually matter in the selection of the next pontiff, the college of Cardinals, God Himself, you know, those guys, that they should elect a Pontiff who meets their worldview. Or else.

The kooks, the conspiracy theories, the outright lies and vehemence, the Pope could not have done a better move to catch the media off-guard then to mention his abdication in such a surprising manner and thus expose their malicious natures and to emphasize my point. This is the reason why the Church must never be democratized. Ever. If for no other reason it should never be democratized so that monsters and sub-human filth such as these never have power within it. Ever.

Now don't get me wrong, the media is right that there is careerism, rivalries and backroom politics within the Church, some of which is downright, old school, Machiavellian shenanigans by some of the more unsavory clerics (and more then a view Modernist heretics) that loathed Pope Benedict XVI during his reign.

But this move, I think, on Benedict's part, will turn out to be absolute genius.

To give context to what I mean, consider what His Holiness worked towards during his Pontificate. Ecumenism and making trips around the world and trying to help the Church recover from the seemingly unending Clerical sex abuse scandal. (a scandal I am happy to report seems to be dying down in Ireland, to the point where new and seemingly unheard of accusations are being scrutinized more thoroughly for unscrupulous motives, and there are ALOT of these now) But he also made motions, some very visible and controversial, to reunite with the sedevacantist community, particularly the society of St. Pius X. There are rumours circulating about that one of the uses the Pope is finding for the recent abdication announcement was to use it, amongst other things, as a smokescreen to deal directly with the SSPX, obfuscating the Church's actions from the media and keeping the more politically minded wolves within the Church occupied with something else to keep them out of the way. Indeed apparently a new offer has been made but I haven't heard too many details. Whatever the case, Benedict's legacy won't be immediately obvious, but I am willing to bet money it has far, far, reaching consequences.

And, truth be told, Benedict is much too smart a man to simply leave the throne cold, as it were. No, he has appointed ALOT of Bishops and made ALOT of cardinals, 'Packing the College' as it were, with men he believes he can trust. Benedict is a nice man, immovable yes, but he doesn't quite have the ferocity that, as a young man, I hoped he would have had when he was made Pope, he may not have the aggression and strength of will needed to storm through the corruption and rot in the old halls of the Church and take this hate-filled new world by the horns and snap its neck. The next Pope, hopefully, will not be the mountain Benedict was, but might in fact be the Hurricane that I at the least, think we need. For that reason my money is on the papabili who are under 70, but you probably shouldn't put your money where I do, I've been wrong before.

Sides, trends are the media is demanding the next Pope be Black or Asian, as if anyone gave two rats asses about American Race Politics outside of America, but say they get what they want, Arinze, or thise other fellow I've heard about get the Office, or event he fellow from manilla, or the one from Sri Lanka become Pontiff. We'll see the media rejoice and produce headlines along the lines of "Crusty old religion of men finally gets over institutional racism, next up, Lesbian-priest marriage gay abortion yay!" Only to be devastated when these men turn out to be just as Orthodox as Benedict was, (hopefully more strident and aggressive about it to boot), it would be satisfying in the extreme to see these talking heads flounder trying to attack the Pope without seeming racist. Not that the media itself has ever stopped being racist, ever, but still.

At the end of the day, apparently the official line as to why His Holiness did not have a Papal coronation was, supposedly, because they didn't have time to organize one (I seriously doubt this is the reason but I won't object), especially since the conclave for his election was unusually short. This time, they have had a month's notice plus the conclave itself, they have no such excuse this time. I hope they have a Papal coronation, that would make mine, and every other monarchist thinker out there, time much easier. Or harder. depending on how outraged republicans the world over are at the Pope having a coronation. Man, it would be awesome to see him crowned with one of those tiaras. 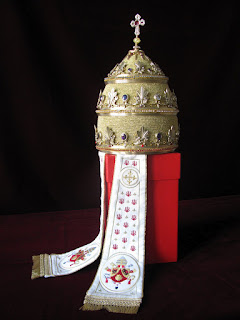 With Regards to Prophecies
Right, I suppose I can't really avoid touching upon this.

In truth, with regards to the prophecies of St. Malachy and the infamous 'lists of Popes, I'll say only a few things. If it is real, (questionable), the list is certainly not a list of all Popes there will ever be, probably a list of Popes before a great chastisement or calamity, secondly, we're already screwed, because the only person who matches the criteria of 'Peter the Roman' is the current Cleric appointed to basically 'stand in' for the Pope and his powers during the conclave. His name is Peter, he is a Roman. Sleep well tonight.

The Prophecy of the coming of the Great Catholic Monarch: Remember when this did the rounds on Monarchist blogs? Its been getting more and more popular over the years and I for one am inclined to give a bit of credence to it, if for no other reason then a lot of Catholic Saints and Mystics have been spouting correlating aspects of the Prophecy or, if nothing else, parroting points. And I do mean a lot. Though I doubt that the next Pope will be the last Pope before the coming of the great chastisement that is to be succeeded by three days of supernatural darkness and the coming of a Great Roman Emperor of Frankish descent (keep an eye on those Capet branches), indeed, if certain prophetic deductions hold that Benedict is to be 'the last Pope of this age' then I say rejoice. Because that almost certainly means that the age of Daemonic sabotage (which is supposedly a century of daemonic infiltration of which we are only now seeing the consequences of) that Pope Leo forsaw and the age of Modernist Heresy is almost at an end. There is absolutely no downside to this other then Benedict himself will no longer be il Papa.
Posted by Servant of the Chief at 08:51 6 comments: 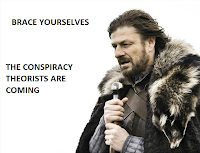 So there I was coming home from a successful job interview ont he train, coffee in my hand, another one of my 'blood and thunder' novels that I shamelessly enjoy upon the table. I open up my phone and go to a news app that came with it, (I have always hated phones until I found I could check my emails and news sources on it, otherwise they can go to hell), and see the Pope has decided to abdicate.

I promptly spit up my coffee in shock, luckily no one was sitting across from me.

Yes two abdications at the start of 2013, not a good beginning in my book, and I certainly wasn't expecting to see another Papal conclave in my life so soon. But so it is.

I have to admit, I adored His Holiness and his dedication to tradition and orthodoxy and, most prominently, his steadfastness when dealing with those within the Church,t he Careerists and the outright heretics and I'd be lying if I didn't suspect dealing with these elements where part of the reason he decided to abdicate, breaking 600 years of Popes dying while in Office.

I will be looking forward to the doubtless tirade of questions, speculation and outright, tinfoil hat wearing, lunacy conspiracies surrounding the lead up to the Papal conclave. If anyone has any information on who might be considered 'papable' I'd be glad to hear it.

Slan go phoile.
Posted by Servant of the Chief at 19:08 2 comments: 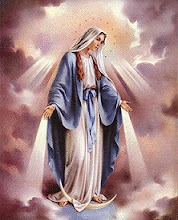 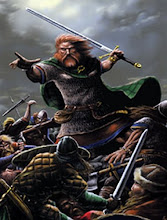